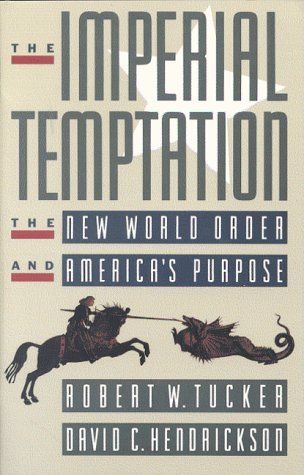 Yet, paradoxically, the United States was left floundering for a new global agenda. In this critical analysis of American foreign policy priorities, Robert W. Tucker and David C. Hendrickson argue that the Bush administration, in its attempts to address the challenges posed by the new global realities, has betrayed the fundamental ideals on which this country was founded.

Taking the gulf war as their starting point, Tucker and Hendrickson dissect President Bushs vision of a new world order, exposing its inconsistency with Americas traditional diplomatic principles. They criticize Bushs all-out military assault on Iraq as a disproportionate and inhumane response to the crisis.

By using force to resolve the gulf crisis when other means were available--for example, a policy of punitive containment--and then walking away from the ruin created by the war, Bush succumbed to an imperial temptation that has seduced and corrupted other great powers in the past. Tucker and Hendrickson make a compelling argument that U.S. foreign policy should return to the guiding principles set forth by the Founding Fathers. They maintain that these principles offer a far better guide for dealing with the perils and opportunities facing America today than Bushs foreign policy agenda.

They believe that the nation has developed an attitude toward the use of force that is both unnecessary and irresponsible, and they advocate a foreign policy for the coming generations that would protect Americas vital interests while remaining faithful to the nations traditional ideals.The Imperial Temptation makes an important--and what is sure to be viewed as controversial--contribution to the national debate over the future of U.S.

Comments
Comments for "The Imperial Temptation: The New World Order and Americas Purpose":