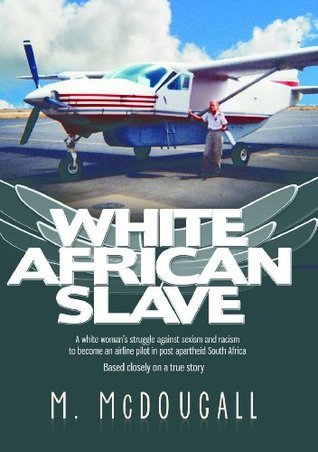 The reversed racism of the new South Africa’s Affirmative Action laws effectively bar her from joining the Air Force and destroy her hope of entering the South African Airways Cadet scheme. Both routes are now reserved for the ‘previously disadvantaged’.She watches as junior non white staff are rapidly promoted above her in her own company and is resigned to racial discrimination diverting her cherished ambitions into a permanent dead end.Hope and love, however, enter her life from an entirely unexpected direction which eventually also takes her to rainy, miserable London where crushingly depressing jobs eventually earn her enough to pay for her flying training.

Just the commercial pilot’s examinations lie between her and her goal. Finally the girl from Kempton Park’s Afrikaans High School with passes in typing and standard level mathematics but no science subjects, actually passes the notoriously tough and unpredictable courses to obtain her commercial pilots licence.However, she then finds that almost as bad as the institutionalised anti-white racism, is the ingrained sexism rampant in the male dominated aviation industry where female pilots are not welcome.Katherine finds that her struggles towards a front seat in an airliner have only just begun.

Seeking flying hours and experience will force her to work all over Africa, dodging civil wars in Ivory Coast and Sierra Leone, escaped lunatics in Nigeria, homicidal air traffic controllers in Mozambique, drunk Russian helicopter pilots, suicidal captains and the largest, most vicious thunderstorms on the continent.

Surely, finally, after all this, she can then find a job in her own country…?